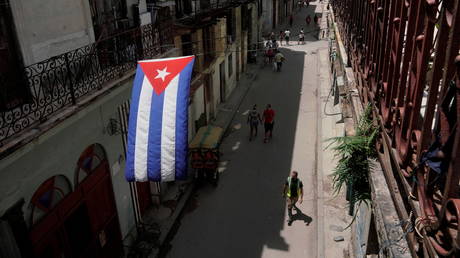 Racial justice group Black Lives Matter has publicly condemned the decades-long US embargo on Cuba as the socialist nation was swept by protests against food and drug shortages. The stance alienated some devotees. | BLM "condemns the US federal government's inhumane treatment of Cubans, and urges it to immediately lift the economic embargo," the organization said in a statement posted to social media on Wednesday, echoing calls from NGOs, the UN, and other countries to end the trade blockade that has kept the country in isolation and poverty for so long. | The group's missive laid 60 years of Cuban sufferin…

Ines Santos (2021-07-16). Do Black People Have the Right to Bear Arms? aclu.org With 233 mass shootings so far this year, the issue of gun violence in the U.S. is all too familiar. Tragic events like the Pulse nightclub and Parkland shootings go from being media spectacles to quotidian events at an alarming rate in a country that often heralds the Second Amendment above meaningful safety for all its citizens. The vigilantism of widespread gun ownership puts Black Americans in an especially vulnerable position given the brutality and human cost of discriminatory policing. | The gun violence epidemic continues to spark debate about the Second Amendment and who has a right to bear arms. But…

Dave DeCamp (2021-07-16). Pentagon: Colombians Arrested in Haitian President's Killing Had US Training. news.antiwar.com The Pentagon said on Thursday that some of the former Colombian servicemen arrested over the assassination of Haitian President Jovenel Moise had previously received training from the US military. | "A review of our training databases indicates that a small number of the Colombian individuals detained as part of this investigation had participated in past US military training and education programs while serving as active members of the Colombian Military Forces," Pentagon spokesman Lt. Col. Ken Hoffman

_____ (2021-07-16). 'This Is Sickening': Forest Defender Joanna Stuchburry Shot to Death in Kenya. commondreams.org "As Africa is now facing its third and biggest Covid wave so far, it is getting left behind in the race for vaccine doses," said the head of UNAIDS. "This vaccine apartheid is unacceptable."

_____ (2021-07-16). Maine Leads US in Becoming First State to Ban 'Forever Chemicals' in Products. commondreams.org "As Africa is now facing its third and biggest Covid wave so far, it is getting left behind in the race for vaccine doses," said the head of UNAIDS. "This vaccine apartheid is unacceptable."

Andrew Emett (2021-07-16). Congresswoman arrested during voting rights protest on Capitol grounds. nationofchange.org "I stand in solidarity with Black women and allies across the country in defense of our constitutional right to vote."